How to Create a Screenshot

This guide explains what a screenshot is, why they're useful, and how to create screenshots on your device.

Screenshots—also known as screen captures or screengrabs—are pictures of your device’s display that show what’s on your screen at the time they’re taken.

You’ll often need to create and share a screenshot when asking for help using Canvas, or working with our Technology Help Desk. Screenshots help our support staff help you as efficiently as possible.

For example, if you see an error message in Canvas, take a screenshot to share with Canvas Support so they can see exactly what’s on your screen. This is often more useful than describing the error, which can unintentionally cause confusion or leave out important details included in a screenshot. How do I create a screenshot on this device?

It’s easy to take a screenshot on most computers, smartphones, and tablets.

For quick screenshots, try using the built-in screen capturing tool included with your device. Take-a-Screenshot.org explains how to take a screenshot on the following devices:

If you need more options than your device provides by default, you can install a screenshot software like Greenshot, Snagit, or Cleanshot X.

Canvas doesn't accept all image formats. If you need to use a screenshot or photo in Canvas, make sure you saved it as one of the following formats:

Save your screenshots as either a PNG or JPEG file. Both formats can be used in Canvas and can be opened by most devices and software.

Many Apple devices save screenshots and photos in the HEIC file format. However, this file format is not compatible with Canvas.

To use your iPhone or iPad photos in Canvas, you'll first need to convert them from HEIC to either PNG or JPEG. You can also change your iOS Camera settings so all newly created photos and screenshots will be saved in a "Most Compatible" JPEG format that will work in Canvas.

What should I include in my screenshot?

Most screenshot tools can capture your device’s entire screen, a specific application window, or just a portion of your screen.

If you’re uncertain which option to use, include as much of your device’s screen as possible in your screenshot. If you’re not comfortable sharing your entire screen, or if there are certain onscreen elements you’d like to hide, at least include the full window of whatever application you’re trying to show.

This is particularly important when asking for tech support from the UW-Superior Help Desk or when corresponding with Canvas Support. When asking for help using Canvas, including a screenshot of your entire browser window tells us some important information: 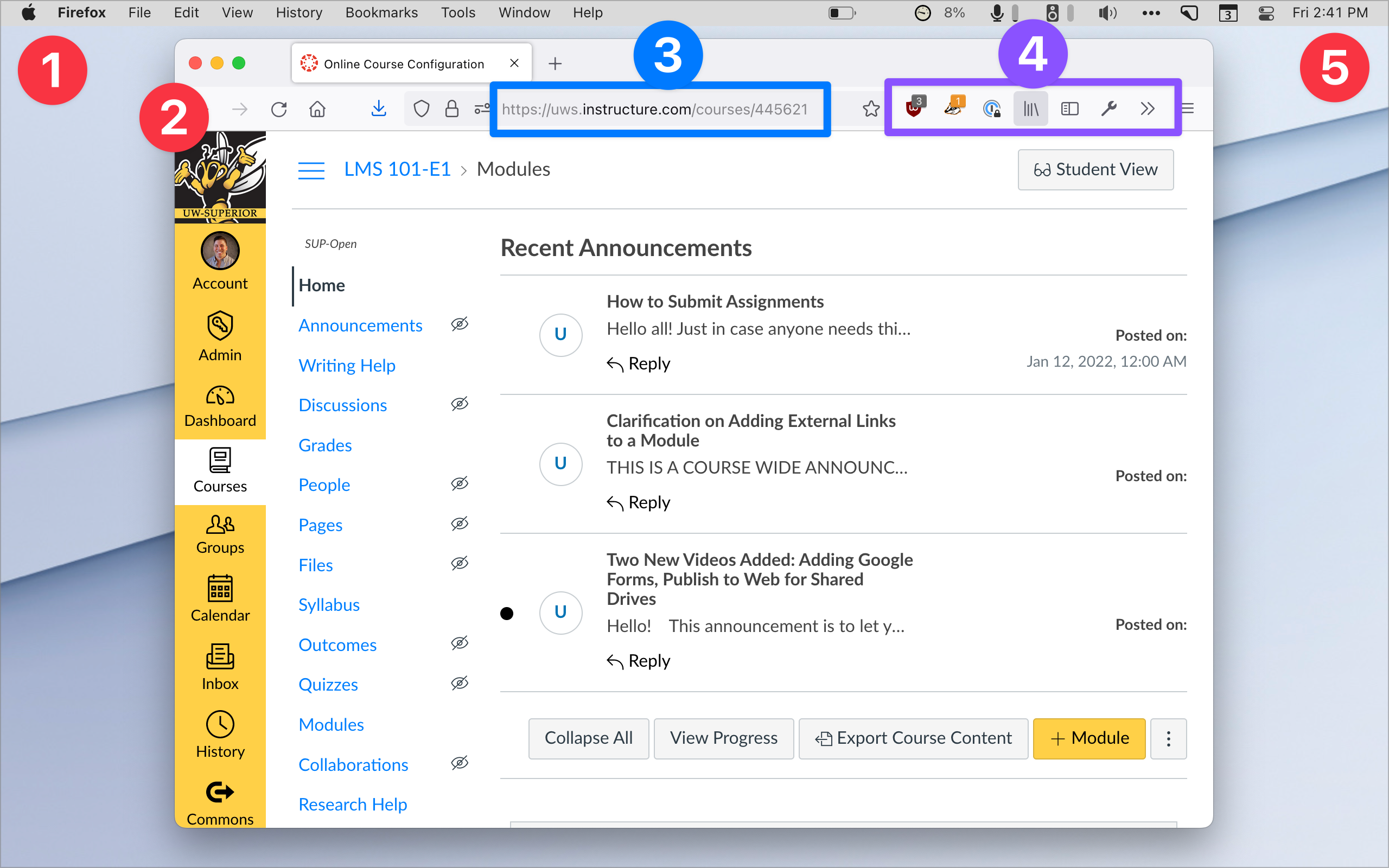 Please reach out to the Technology Help Desk.